“I realised that the only thing I could do at that point was to write about what I was going through (…) If you show your weaknesses, no one can judge you.”
– Máni Orrason

“Is he going to be alright???” – says his genre info on facebook. The passionate Icelandic singer songwriter, Máni Orrason, just moved to Berlin, to push his music career and tadaaaa he released his debut album ‘I Woke Up Waiting’ this year via Guesstimate.

We met Máni after his groovy set at Auster Club, when he was playing another Small Sessions live in concert show and had a chat about his debut album, his intentions to write some music and about suits and glamorous looks.

Where are you from?

I come from Iceland. I’ve lived in Spain for a few years as well.

What’s the best thing about being an artist and what’s the worst?

Best thing is the freedom of expression. The ability to define yourself at your own accord. The worst thing about being an artist is the things you have to submit to to be able to make your art.

You released your debut album “I woke up waiting” this year, what inspired you the most for this record?

I made this album while living in Spain. I was at a turning point in my career. After promoting my first record “Repeating Patterns”, I found myself back at my parents house worse off than when I’d started. I was depressed and was falling apart in many ways. My dad and I set up a studio where I was working. I realised that the only thing I could do at that point was to write about what I was going through. To explore my turmoil, to express it, to wear it with pride. If you show your weaknesses, no one can judge you. I knew I couldn’t just hold it back and try to write pop songs. It gave me a will to try to understand and conquer my issues.

What’s your favourite song on your new record?

I’d have to say “You’re Acting Like A Fool”. I like it because it’s observational. I’m looking at my surroundings and seeing myself in those around me. It’s also a groooover. It’s very fun to play live.

In which way are you influenced and inspired by other artist?

I’m inspired by peoples outlooks. How others perceive the world. I’m inspired by artist that give me a wider sense of it all. It’s about definition, outlook, mood.

Have you ever wanted to become a musician when you were younger?

Yes, ever since I saw a video of The Beatles playing “Twist and Shout” at Shea Stadium when I was 12. That blew my mind.

Do you have any childhood heroes?

Make Way For Love by Marlon Williams. It’s really the most beautiful album. Love, lust and heartbreak all in one record. I almost saw him in London a few weeks ago but the show was cancelled (sad face). He’s also an absolute babe and I want to protect him.

Your desert island record would be …?

Tough. It can’t be too joyous nor too sad. Maybe something nostalgic. Maybe just “Twist and Shout”.

Is there anything on your list you’d really love to play one day?

I’d love to play the whole of Springsteen’s “Darkness On The Edge Of Town” live. That’s the greatest record and I’ll fight anyone who disagrees. One day I’ll cruise down the New Jersey Turnpike with a babe by my side. ’69 Chevy. Drive for the city. Huuuumid August air. Blast that album. Wow, I’m trembling.

In your latest music video for “Acting like a fool” you’re wearing a nice grey-blueish suit. How important is the way you dress for your art/music/performance?

I think because I Woke Up Waiting is such a personal album for me, I have to separate myself from the record to an extent. The suit is an armour of protection in a way. I also just love show business. The glitter, the disco balls, the glamour.

What means fashion to you?

I try to stay practical with how I dress. Day to day I wear similar things. Black boots, a pair of jeans, t-shirt, denim jacket. It’s easy, It stops me from getting too self conscious. When I get all gussied up and go out it’s a different story. Then the glitter comes out.

Right now it’s this Mitsky sweater I stole from my partner. I bought it for them, but stole it right back. It’s beautiful and comfy.

What did you pack in your suitcase – do you have any travel essentials?

MY SLIPPERS. I have fluffy slippers I always tour with. I like to take a book and some recording equipment as well. Other than that I make do with the basics.

Thanks a lot for taking the time and giving us some honest answers, Máni. We can’t wait to see you next time playing a groovy live set. For tour dates and more check out Máni’s website! 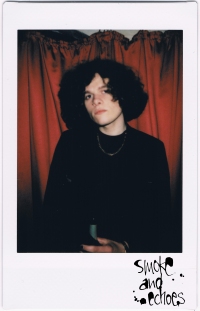 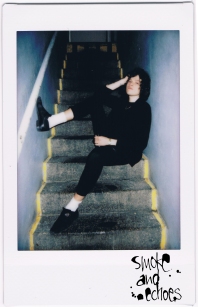