Keep your eyes peeled for The Hunna!

Four lads, one love – 100!
Those talented, young men from the UK are on the best way to rock the top. Their sound is catchy, honest and pure, combined with a rock flavour.
We had the pleasure to meet and chat with The Hunna lads in Berlin after their brilliant gig at Auster Club in Kreuzberg. 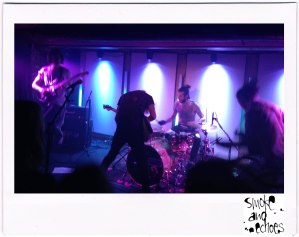 Who are you?
We The Hunna.
Where are you from?
Watford, United Kingdom.
Where did you meet?
Bandana-Dan & Valentino-100 met on a college music course at the age of 16. Since then the music hasn’t stopped. Then met Insta-King and The Prince. The Hunna was complete.
Why did you name your band The Hunna?
We all were at party somewhere in Bath, UK and after a heavy night making our way home the name came to us. Our Hip-Hop influences helped the creation.
What is your upcoming album about?
The album is going express our story… real life emotion from personal experiences that have actually happened. No fucking around… The Hunna story!
In which way are you influenced and inspired by other artist?
We have a lot influences in all genres of music but honestly we are very open minded when it comes to it. It doesn’t matter where is comes from, who or how it was formed…. If it’s a rad song then it’s rad! Always.
What’s on your MP3/iPod?
So much music man! Unreal! Currently listening to Kanye Wests latest album… Rihanna, Drake, Future, Justin Bieber, Deftones, Foals, Shura, Wet and so so so much more!
Imagine if you could choose another decade of music and fashion, which one would it be?
It has to be the 60’s… The music, fashion and everything included would be 100. The style of living would be so much fun.
What means fashion to you?
A perfect way to visually express yourself. It never gets boring! Fashion lives on.
How would you describe your style?
Would probably have to say we are more edgy than anything else. However we do clean up well! We like to wear whatever we want and currently love to custom our style. Hardbars Hunna.
What influences you in the way you dress?
We always influence each other and talk about what would be good with what. We don’t have a stylist or anything like that… We just wear what we think is dope.
What did you pack in your suitcase?
Aha! We’re not even sure what’s in them anymore! We just put everything in them and hope for the best! Living on the road does this to people. We always improvise now on the day of a show.
Thank you very much for the interview, lads!
stay tuned…
xx Jules & Christian 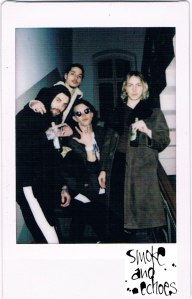