Did you ever fall in love right by the ocean? – We did with the British Indie-Rock band Coasts.

Coasts are Chris(vocals), Ben(drums), David(keys), James(bass) and Liam(guitar).
The lads just released their first album in February this year. It contains well-known tracks like ‘Oceans’ or ‘Rush of Blood’ as well as brand new ones. It comes on CD and also on turquoise Vinyl. Their sound is very catchy, with a good mix of pop-sounds and rock-notes. Lovely lyrics by Chris are just the cherry on the cake.

They were playing 5 gigs in Germany (Frankfurt, Berlin, Hamburg, Cologne, Munich) in spring 2016.
We had the pleasure to meet and chat with Chris after their gig in Hamburg.
Check out our interview below with a sound- and style-check featuring Chris.

I am Chris, the lead singer of Coasts.

Where are you from?
We formed the band in Bristol, UK. Most of us have since moved away from the city but we still call it home. I (Chris) am the only one that actually grew up there.

Where have you met?
We all first met when we were living in Bath around 8 years ago. We were all friends before we started to make music together.

Why did you name your band Coasts?
We had already started to create music before we had a name. We felt like we needed a name that would perfectly capture the essence of what we were writing, which was uplifting, summery pop music. Coasts also brings about a sense of nostalgia that we like to explore and indulge in.

What is your album about?
Our album is about the journey that we have been on as friends over the last 5 years being in a band. Its uplifting and melancholic, showcasing the ups and downs that we’ve experienced.

In which way are you influenced and inspired by other artist?
As a songwriter I am influenced by so many things as well as music. So I take inspiration from life, literature and love etc. I’m sure that everything we listen to makes it way into the music we make somehow.

What’s on your MP3/iPod?
I’ve been listening to Leon Bridges a lot recently. Majid Jordan is another who I am really digging.

Imagine if you could choose another decade of music and fashion, which one would it be?
That’s an incredibly hard question because there are elements of every decade that are incredible and terrible in equal measure. I’ll go for the 80’s for a laugh though.

What means fashion to you?
Fashion is a way of expressing yourself in the most instant way.

How would you describe your style?
I like to keep it fairly minimal and fuss free with little hints of flamboyance. I like clean lines and interesting shapes.

What influences you in the way you dress?
There isn’t really one particular thing that I take inspiration from. If I see something or someone wearing something that I like I’ll make a note of it and try to put my own twist on it.

Indispensable piece of clothing for you?
I am always wearing a pair of boots. I just got some laced Doctor Martens black monkey boots which I have barely taken off.

What did you pack in your suitcase?
Too much! My bag is constantly over the weight limit at the airport. A few flowing shirts is a must for me at the moment.

Cheers a lot for the interview Chris!

What’s next?
They’ll be going on tour in America from April ’til May. Some festivals are also already confirmed yet like ‘Glass Butter Beach’, ‘Liverpool Calling’ and ‘Boardmasters’ just to name a few. 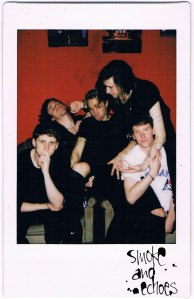 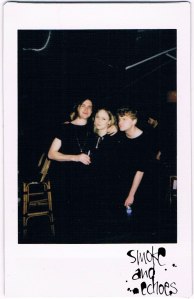 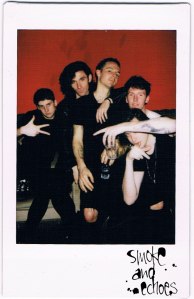