“I think I am a performer at heart. I love performance and that kind of being on a stage and creating a theatrical experience.”
– Olly Alexander

Did you ever feel like you just want to escape the real world, if even for a minute or two – here are 36:49 minutes of a brilliant phantasy created world by Olly Alexander for you and he calls it ‘Palo Santo’. ‘Palo Santo’ not only marks the second studio album of London based band Years&Years it also comes with a great artsy concept,  it’s own language, a fantastic live show and serious subjects as related to gender equality and sexuality.

We had the pleasure to meet the man behind the record, Olly Alexander, and had a nice chat about him being a performer, about ex relationships and about ‘Palo Santo’ and fashion of course. 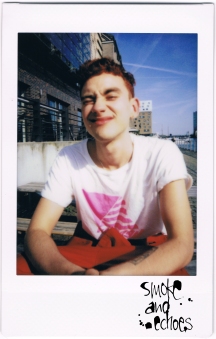 When you woke up this morning, what was the first thing that came into your mind?

Well I had a dream about my ex. So I woke up, feeling anxious and sweaty and so I wanted to get that our of my mind. And I went and got a coffee from the hotel and yeah that was it (laughs). Also sometimes I woke up and I was a bit confused as where I am, because I’ve been to so many different places, like in the last week .. so I was like ‘Oh where am I?’.

You’ve been creative for a while now, as an actor and as a musician as well. Have you ever wanted to become that kinda showman?

Ohh (exciting smile) .. well I think I am a performer at heart. I love performance and that kind of being on a stage and creating a theatrical experience. But then I also love like being a songwriter, you know, like being a bit behind the scenes. I think if everything else stoped I would keep writing music, I would keep still playing songs. I guess I’m sort of trying to figure out how much of a showman I really am.

Can you name one of your favourite showman in music history?

You recently released your second studio album ‘Palo Santo’, where you created a phantasy world and where you let us dive into a different dimension. How did you came up with the idea for this parallel or even future world?

Well there were like lots of different inspirations for it. I kind of just let myself sort of imagine like what would be, how can we push the visuals, the furthest we can go and I kinda started the whole thing like an art project. I got a sketchbook and I was collecting all those images that inspired me and these like poems and drawings. You know I’ve always been really into phantasy and psy-fi and like mysticism. And so I kinda combined all together and I thought, I didn’t want to set things up in the real world, I wanted to create my own. I thought it would be really interesting to have like an android society and how they would deal with things like sexuality and gender and identity.

Would you say it’s kind of an escape of the real world for you as well then?

Yeah, one of my favourite things about pop music is like the escape and I definitely wanted just to escape to a world of myself. You know I live in my head quite a lot like I always have day dreams and I just let my imagination run free. I love being there really!

While working on your new record, you scrabbled a lot, collected ideas, made hundreds of sketches. How difficult was it to bring all of those ideas together and to condense them in the end?

I found it quite a challenge, but luckily I had some really amazing that work with me and kind of were able to like help me, really like focus on the details and the themes, that were most important. Fred Rowson , who directed the video, I worked with him a bunch of times and then we gradually got a really strong team together and so there’s someone in charge. I thought like ’ oh yeah I’m gonna be on top of everything’, what everyone’s wearing, how everything looks, what the shots gonna look, what happens next, but I just couldn’t, you know. It’s just too much. And luckily I had some really amazing people to work with, so I think you have to. You know and everything is a collaboration, that’s like really really special.

Do you have a favourite track on your new album?

I think one of my favourite tracks is called ‘Lucky Escape’, it’s not a single. It’s quite an emotional song and I wrote it when I was really just feeling so like petty and like angry about my ex. And I was kind of embarrassed by how like raw the song came out, because I wasn’t even sure if I want people to see this side of myself, so ugly and i was kind of sick when I recorded it. But then it just seemed to end up making sense and it worked and I’m happy that made the album.

As a performer on stage you always need to be nicely dressed up. What can we expect of the humanoid being Olly Alexander for the Palo Santo tour?

(smiles) Well I’m kinda getting into that at the moment, but I think like you know I really love playing around with silhouettes and wearing things that feel like less gender, you know. Like I wanna play around with gender with what I wear. And I’ve been really feeling like boiler suits and crop-tops lately, which is exactly what I am wearing right now (laughs). And I’m defiantly going to do outfit changes, like making crazy things. I’ve taken a lot of inspiration from Tank Girl. She’s like a cartoon from maybe the 60’s and she’s like a bad ass soldier girl and who wears sick outfits.

What means fashion to you and how would you describe your style? I think you’re quite a chameleon..

Yeah (laughs)! For me it’s like what you wear it’s a fun way to express like how you’re feeling that day or expressing that particular moment and it’s like I wanna just have fun with clothes you know. I’ve always loved fashion and I think it’s more about developing your own personal style than it is like following a trend or wearing something that you think is cool. I don’t care about that. I always love it when someone goes for a look, you know. They just commit, this is what I wanted to wear, this is what i feel good in, how they feel sexy like that’s just what I wanna do as well.

Do you have a favourite designer?

(sighs) There are like loads! I guess I love a mixture of like vintage, like utility work wear stuff, that’s not really a label or anything, but then designers, I recently been really into Martin Rose. I love Christopher Shannon, yeah.

Do you have an indispensable piece of clothing?

I always have a pair of white sneakers. That is like my staple in my wardrobe, because they kinda go with anything.

Is there a specific one?

What did you pack in your suitcase? Do you have any travel essentials?

I think a good moisturizer is a travel essential (laughs), because at the end of every day I wanna wash my face and put something on that makes you feel kinda glam and like it’s doing my poor skin good.

You already played many shows around the globe. Is there a special place or venue or even a festival, you’d really love to play one day?

Well we’re lucky enough that we played this one festival in Japan called ‘Fuji Rock’ and it’s just like in this amazing place. Like you drive through the mountains, so beautiful and it’s a ski resort, but you play the festival in the summer so it’s sort of weird and it feels like you shouldn’t really be there, because it’s just been taken over just for the festival and it’s just really strange and surreal, but really amazing. And I love Japan, I just love it there.

What was the most funny thing, that ever happened to you on tour?

Oh god, wow! (laughs) Well one time we did a show in New York, this is a couple of few years ago now and I was really really sick. Like I’ve gone to this doctor the day before, he was like this crazy American doctor, who like did all those kind of weird things to me and gave me loads of prescriptions and I was on on this weird prescription medicines and about to had to do the show. And then we finished the show and our manager came up to us and she was like ‘Okay I didn’t want to tell you, because I know you’re not very well, but Katy Perry and Carly Rae Jepson were in the audience tonight and Katy Perry wants to come and say hi!’ and I was like so sick and it was just like delirious ‘What Katy Perry is here?!’. And then she came into our dressing room and it was a really tiny venue, literally our dressing room was the size of this table (a normal size beer table) and Katy Perry comes in and she’s like really chill, really normal and she’s like ‘Hey great show!’. And I remember meeting her and it all felt like a dream, you know. This is bizarre!

That’s a good one!

I’m happy I had an answer for that (laughs).

Thanks Olly, we’re happy for all of your honest and lovely answers and can’t wait to see you next time live on stage, performing your new album ‘Palo Santo’ as a humanoid showman, entertainer and performer. For tour dates and more check out Years&Years website. 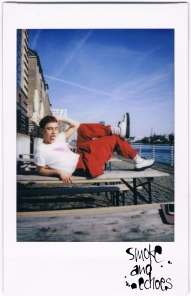 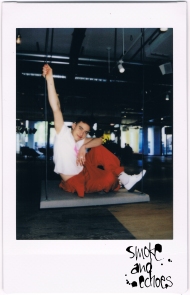 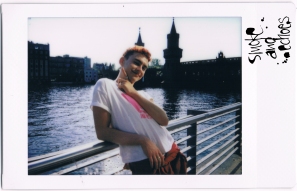 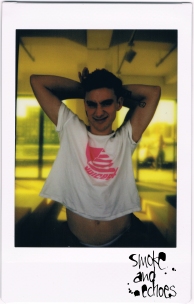