Stockport, Greater Manchester (UK), is the place where the five piece band grew up and where they formed their indie pop band Blossoms in 2013.

The band consists of lead singer and guitarist Tom Odgen, bass player and backing vocalist Charlie Salt, lead guitarist and percussionist Josh Dewhurst, drummer Joe Donovan and Myles Kellock, who play keyboards, synthesizer and does backing vocals as well. They released their first single ‘You Pulled a Gun on Me’ in January 2014 since then they have put out two more singles until they finally hit the charts with their fourth single ‘Charlemagne’ in 2015. This year they released their homonymous debut album ‘Blossoms’, Virgin EMI records.

In spite of everything they achieved in such a little amount of time, we could say that they are still pretty down-to-earth, cheeky and smart as well. They actually sometimes come over a bit shy and seem really genuine. We met Blossoms in Berlin to have a chat with them about Stockport, records and their funniest occasions while touring. 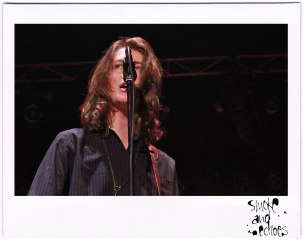 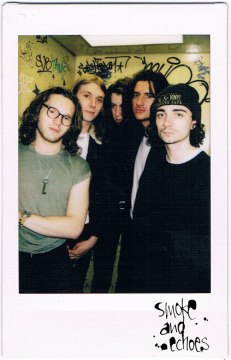 Thanks for taking the time to have a chat with us. How are you doing, guys?

Tom: Good.
Joe: Good thanks, very good.
Charlie: It’s good to be back in Berlin.

Tom: Yeah. It’s our second time here. Charlie has been a few times here as a tourist.
Charlie: I also went to a stag do in Berlin. That’s very fun.

This isn’t your first show in Germany, you played at Reeperbahn Festival this year as well, but is this your very first show in Berlin?

Tom: No we supported The Coral at Lido, in April.

Oh that’s just around the corner, how was the gig?

You’re from Stockport. We’ve never been to Stockport. It seems to be like a very nice town as we can see on your flags and on your ‘I love Stockport’-Tees. What’s so special about Stockport?

You named after a pub in Stockport also called ‘Blossoms’. What’s so special about this pub?

Tom: Nothing. It’s just a good name. I’ve never been in this pub before.

So you just ran on the street and passed it by and you were like ‘yeah that’s it’?

Tom: That’s exactly it! But yeah the name has nothing to do with the pub, really.

You just released your debut album a couple of weeks ago, do you have any favourite songs on your record?

You guys have been friends for ages. How does it feel to be on tour with your best friends?

Tom: Me and Joe have been friends the longest, when we were 12 at school. So we were growing up in school together, were going to concerts together, were going to night clubs together and all that kinda things, we’re basically growing up together.
Charlie: Me and Joe were in a band.
Tom: Yeah so Joe and Charlie were in a band. I remember seeing Josh playing with his old band and motherfucking shredding his guitar. At one point we decided to get together, us three, Charlie was playing with Joe.
Joe: I was trying to play with Tom in a band before (laughs).
Tom: That’s it, it’s not even worth. So we needed a guitarist. I remember old Joshi-boy was a …
Josh: …Local legend!
Tom: And Myles is the final piece of the puzzle. We used to be a four piece for a while. We used to go for drinks at Myles flat and then one night I was like we need a keyboard player and Myles was like ‘I play keyboards!’.

What’s the best thing about touring?

Tom: Working with these guys (all were showing at the guys behind us – their crew). It’s a lot, traveling around with your best mates, to all these places you never thought you really get to. Tour is a funny thing. But if I would explain it to you, you would be like ‘nah that’s not funny’.
Charlie: Yeah to play your own music around the world.

What was the funniest thing that ever happened to you on tour?

Charlie: Oh there’s too many in a row. We had a fun night in Tokyo once.
Tom: Tokyo was funny. Me, Myles and Charlie, we were very jetlagged and we started drinking and ended up in a karaoke bar with two Japanese girls, who couldn’t speak English, so we were singing random songs for fun. There’s loads of stuff. Like I said it’s kinda hard to explain.

Karaoke is always a good option!

Tom: Yeah karaoke is always fun.
Myles: I used to do ballet live in a club.
Tom: Myles usually raps as well, improvise rapping which is funny.
Joe: One of the maddest things recently was in a taxi in LA and the taxi driver has been on American Idol. He did the whole thing and we were like this is actually happening, that was very funny.

Do you have any travel essentials?

Fashion-wise do you have any indispensable piece of clothing?

Charlie: Diamonds and G-string (everyone’s laughing).
Tom: I mean without the other it won’t work. You know what I mean? If I just took this T-shirt for example.
Joe: My key – my jewelry.
Josh: Mine probably shoes. These are my comfort/fashion shoes.

You all had usual 9-5 jobs once. How was the feeling when you decided to quit your 9-5’s and just started being full-time musicians?

Myles: The main reason we had to quit our jobs was because it took a time of work, obviously we were working for one apple. We just had to quit to keep on going.

Tom: I downloaded an album by Banks, it’s called ‘The Altar’.
Charlie: I like downloading offline on Spotify, so mine was Sunflower Bean the debut album.
Joe: The last album I bought was David Brent’s album. Myles: Ricky Garvais.
Josh: I was given an EP from a friend.

Describe music with one word: Music is…

Cheers lads for the enjoyable interview. For all of you who missed Blossoms set in Berlin, they will be back on the 19th of November supporting Jake Bugg at Astra. So keep your eyes peeled and check out their latest music video for ‘Charlemagne’ below. 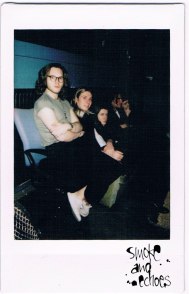 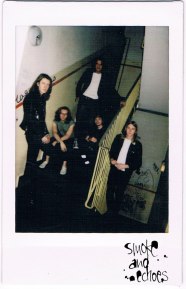