LISTE NOIRE is the new incarnation of the art-wave project Velvet Condom. Singer and guitarist Alice Gift and synth-master Oberst P., who are now joined by new member Kali on guitar and keyboard, represent what they call “Disco Noir”.

The Berlin based French-Swedish trio released their debut EP “Afire Afire” in April 2015 followed by their full-length album called “Brace” in the spring of 2016.”

We had the pleasure to meet the guys after a gig in the Antje Öklesund, a small venue in Friedrichshain in Berlin, it was actually the last event to be hosted in this particular venue. It was the right ambient to create an special atmosphere, where the band performed a great set combining songs from their recent release with some of the old Velvet Condom repertoire. Impressive analogue synth sounds, arpeggiators, clean vocals and rhythms that make you wanna dance with tears in your eyes. We are totally in love with their 80´s inspired sounds and melodies and beautiful theatrical performance .

You can find their new album ‘Brace’ on their bandcamp page (link below), make sure you give it a shot and buy it if you’re just as hooked on it as we are.

We had a chat with the band, check our interview below to find our what they had to say.

Who are you?
We are Alice Gift, Oberst Panizza and Kali from Liste Noire.

Where are you from?
Alice and Oberst are originally from Strasbourg, France and Kali comes from the outskirts of Stockholm, Sweden.

Where have you met?
Alice and Oberst met in Strasbourg where they lived before moving to Berlin. Oberst and Kali met and both work at the upside-down bar Madame Claude in Kreuzberg. They bonded over their shared passion for synthesizers and electronics and Alice also used to DJ there until very recently.

Why did you name the band Liste Noire?
Because of shared experiences of exclusion and rejection. Of not being welcomed because you don’t fit in or refuse to conform. To be proud of being different even if that means alienation from society. To be your own island.

What is your music about and how would you describe your style?
Our music deals with a bunch of different topics. Strictly musically speaking it’s always a form of escapism – which of course is nothing new. It’s about liberation and breaking out from the mundane. Lyrically we tend to deal with spirituality, hedonism, decadence, displacement, statelessness and there might be a couple of love songs in there too.

What is your album ‘BRACE’ about?
BRACE is the first album we’ve ever done all together from start to finish. So it was very much first attempt to find our collective voice. Oberst and Alice have already made music together for many years and Kali was new in the group so the word BRACE in itself deals with that – holding parts together. Specifically the album, as mentioned above, deals with several topics and was coloured by several events in our lives during the time we were recording it. We saw a number of personal tragedies during 2015 and that definitely had an affect on the overall sound and the lyrics and one recurring theme throughout was the impending collapse of the European Union. Or so it felt at least. With what started in Greece, the financial disasters and then with the migrant crisis. This was always a topic of discussion in the band so I’d say that the European Zeitgeist is a general theme on this album.

In which way are you influenced and inspired by other artists?
In every possible way. Everything in life influences you some way or another so even a song on the radio, although boring and irrelevant to you, has an influence. A younger band can be inspiring by the sheer force and with their knowledge of sound and production.

Imagine if you could choose another decade of music and fashion, which one would it be?

Alice: I do like my own decade I must say. We have so much creative freedom nowadays, but IF if I had to chose I’d love to go back to the late 70’s and beginning of the 80’s.
Oberst: Early 50’s or late 70’s.
Kali: Musically I think I’d have to say late 80’s/early 90’s but fashion wise hell no.

What means fashion to you?

Alice: Fashion to me is a way to create different characters, to hide ourselves and to become someone else.
Oberst: Inventing the way you look without trying to imitate anybody.
Kali: The removal of the supposed importance of fashion.

How would you describe your style?

Alice: My own style is a mix of dark Rock’n’Roll and French 80’s dandy pop.
Oberst: Somewhere between the Cramps and Kraftwerk.
Kali: Minimalistic Monk.

Alice: The streets and nights of Berlin.
Oberst: Myself.
Kali: Photos of Jean Genet.

Alice: Black slim jeans and Chelsea boots.
Oberst: I can survive if I’m naked, but I need a pair of Doc Martens.
Kali: Well, it’s a whole ensemble.

What did you pack in your suitcase?

Alice: My jewellery, laptop, mascara, sunglasses, magazines, all my shirts, duct tape, earl grey black tea, pills and a sleeping mask.
Oberst: My keyboard, one book, news newspapers, a camera.
Kali: Depends on for what reason I’m traveling but there’s always books, an analogue camera, notebook and remedies from back home in case I need it.

Thanks a lot for the interview guys! We’re looking forward to seeing you soon again, playing another gig somewhere around. 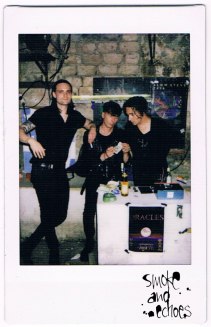 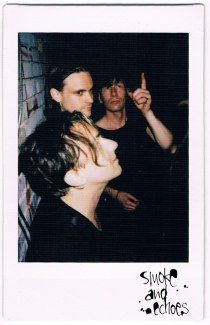