‘AY AY AY’ – powerful, cheeky and full of ideas – eyes wide open for OTHERKIN!
Otherkin are four lads from Dublin, Ireland, who started playing music in a band a couple of years ago, already released an EP and made an exclusive vinyl with Flying Vinyl. Their music is pretty grunge, rock and their shows are very enthusiastic and energetic. You should probably better get your dancing shoes on and get ready for a wild ride in the crowd with Luke (singer of Otherkin). The smashing guitars, the drums and even Luke’s voice – they know how to fill a room with some really good rock music.
We met the guys before their show at the Pure & Crafted festival, on a sunny rooftop, in Berlin. If you really want to know what’s so special about their name and why they like punk and kids toothpaste read our interview below. 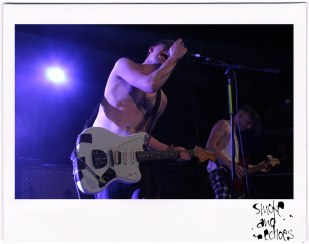 Where are you from and where have you met?
Luke: We went to Toronto in 2010, myself on the guitar and I sing, David who plays bass and Conor who plays the other guitar. We lived in Toronto for the summer and we spent a lot of time on a porch, drinking and playing guitars. We thought ‘yeah let’s form a band’. We waited a few years, got home, formed a band, met Rob online, he’s our drummer. And yes we formed and started playing music, putting out music.

Is it you first time in Berlin and your first show here?
It’s our first show in Germany. We’re really excited. We’ve heard a lot about German crowds, that they are really enthusiastic and we’re looking forward to the gig and we’re coming back again in September. So hopefully people will remember.

Where will you play then in September?
We will play Reeperbahn festival in Hamburg, also club shows in Dortmund, Munich, Frankfurt, Hannover and we do have a headline gig in Berlin as well.

Is there any artist today you won’t miss at the Pure & Crafted?
Conor: I really wanna see Frank Carter. I saw Frank Carter a couple of months ago in Dublin and they were pretty good, so looking forward to seeing him again.
Rob: Yeah he’s a great frontman.
David: I kinda wanna see Noel Gallagher, because he has this very weird quote about when he plays a festival. He says when he plays a festival, if you wanna do it really well you just give 70%. So I wanna see what this looks like live and hopefully it’s a good show.

How do you like the festival? The concept of the Pure & Crafted is very special – a mix of music, heritage and motorbikes.
Rob: I freaking love the motorbikes.
David: There’s a lot of sick bikes in the front I really like that, too. I hope maybe one day I’ll be able to ride one of these things.
Luke: I think it’s really cool. Concepts like this don’t happen that often and it seems great here. It’s really nice, we don’t have this back home.
Rob: Very different to Dublin.
Luke: We do have a lot of festivals back home, small festivals and none with motorcycles. And they are treating us very well here, the food was exclusive.
David: Ah yeah, food is killer!
Rob: Yeah a lot of good vegan food. Luke: And we’ve got a good Warsteiner (laughs).

Is there any story or idea behind your name OTHERKIN?
Conor: I read this article in kinda like a culture magazine and it seemed pretty cool. We didn’t look far into it and we sort out at a point were we started playing gigs we got a very angry email saying ‘change your name’, so we had to change our name. A few month later all these people teed their dragons were emailing us like ‘what the hell, why do you call your band OTHERKIN?’. You know Otherkin is like a subculture.
Rob: It’s crazy, these people think they’re animals.
David: The funny thing is that it’s a modern phenomenon, it didn’t exist before the internet. If you go on Instagram and hashtag ‘otherkin’ you can see like 700 pictures of things with a tail and then there’s just one pic of us.

But you wanna stick to the name?
Luke: Oh yeah definitely. It’s way too late. A lot of people hate Otherkin, like the community, not us maybe. We have to wait until we become more famous, then people will hate us more (laughs).

What influences you the most while working on your tracks and especially on your latest EP?
Rob: I think our live show probably, we’re very much like a live band. That’s the best way to see us as live.

So you create your songs live when you’re playing or even when you’re jamming?
Rob: Yeah! We wanna make sure that they are good live. You know some bands are just studio bands with an orchestra in the background, but it’s not really us. David: A lot of bands there’s maybe just one guy who writes the songs. It’s cool to have a great song. But we feel like we really wanna feel the vibe of each other. It’s 4 boys, sitting in a room and make really live fucking music! Luke: Yeah, we kind of make songs that we want to share with people in the sense of they’d love to come to our concerts and be like ‘yes this is great’.
Rob: Party music!
Luke: Yes entertainment. Music for people who drink cheap beers, too (everyone laughs).

What’s the latest record you bought?
Rob: Did you hear about the band called Viola Beach? They were Friends of us, but they unfortunately died and it’s horrible. Their album went to number one in the UK and I bought that. And I’m still waiting for the vinyl!

You mentioned Viola Beach, they did a record with Flying Vinyl. You also did a record with Flying Vinyl, how did it come?
Rob: Yeah Flying Vinyl, they’re awesome!
David: They sent us an email to our manager like ‘hey we would love to do a record’ and we were like ‘yeah cool that’d be great’. They just took two of our singles of our first EP, ‘AY AY’ and ‘Feel it’.
Rob: It’s a cool idea though and I think I’ll actually sign up to it.
Luke: We always wanted our music on vinyl anyway, but it’s expensive. We might think of doing the album on vinyl, it’s a great thing to have. And people buy vinyl now they don’t buy CDs. They buy vinyl.

Yeah vinyl never dies.. Imagine if you could pick another decade of music, lifestyle and fashion which one would it be and why?
Luke: I like the fashion of the 80’s.
David: I like to be in New York or London in 1976, when punk was just happening and they didn’t give a fuck about anything.
Rob: I think there are a lot of English subcultures, like sub-subcultures are kinda dead now, but back to the 90’s would be cool. Like teddyboys, punks, skinheads,…, it’s pretty kinda interesting.
David: Yeah I like the whole gang-culture, we’re all in this together.
Rob: Any of those English subcultures from the 60’s to the 90’s. There’s amazing fashion movements. Punk was a fascinating thing to happen. People were disgusted by them it was crazy. When punk first came out, it was so outrageous, it was amazing and it was so fucking offensive for the people.
Luke: It was just one of these real kinda moments when music and fashion really collided.
Rob: Yeah! I Mean hip hop is the only thing that’s real still, does that? And I think apart from hip hop fashion and music don’t happen as much anymore.
Luke: I find like maybe hip hop is more now sort of high-end and kinda expensive. The thing I like about the punk scene is that it’s a really rude scene. It was just what people had at home and they made things out of older clothes. That was a great decade!
Rob: Yeah it’s pretty cool. I’d say it was a very interesting time to be alive from the 70’s.

What influences you in the way you dress? And how important is your outfit for your setting on stage?
Rob: For a long time we all just wore black. I think certain bands dress kinda similar, looks more authentic.
David: Yeah – like a gang! You know The Clash in their clothing they didn’t give a fuck.
Luke: I feel that with your music you’re trying to present a certain thing to people and why not to do that as well with your clothing? I mean we’re trying to send a message – whatever message that might be. Bands that we kinda always have liked, were bands that were wear always kinda bold image. Let’s say The Hives, The White Stripes, always very striking in their press shots. Colours were great. It was something we thought about it, but not too much. We just did it!
Rob: I think when we started doing it as well, probably a year or two with the band we started to kind dress more similar. I think people took us a lot more seriously. I Think just before that we were just some band from Dublin.

Do you have any favourite pieces of clothing in your wardrobe?
Conor: Yeah, I got a sick ass Prince-shirt!
David: I like to buy a lot of really cheap t-shirts for some pennies. If my hand’s bleeing on stage ‘cause of the bass it’s okay because it’s disposable.
Luke: I actually like Dave’s pants a lot!
Rob: Yeah these are Dave’s new pants.
Luke: I like wearing oversized stuff and I have like an acid wash black denim vintage jacket which I like a lot. I haven’t worn that in a while, but I like acid wash.
Rob: I bought this kinda crazy biker jacket in Camden, London, in like a cyber Goth-shop. It was really fucking weird, but I literally wear that everyday. The inside is totally covered with the passes when we played at festivals.
David: I also do love my leather jacket.

What did you pack in your suitcase? Are there any essential items you would miss on tour?
Luke: I packed my Gameboy Colour with Pokémon (yellow) and Super Mario Land 2. My Gameboy is 18 years old and it still works fine and yeah it’s a great game. I also packed an Iggy Pop biography ‘cause I’m kinda going through an Iggy-thing at the moment.
Rob: It’s pretty much my leather jacket.
David: I brought a Kurt Vonnegut novel ‘Galapagos’.
Conor: I brought like a kids toothpaste, tastes like strawberries and yeah it’s really nice!
David: He didn’t know that when he bought it (laughs).
Rob: I actually change my item. I got a One Direction toothbrush (laughs). It’s like a childs toothbrush, it’s useless but it’s pretty cool!

You should try to combine it with Conor’s strawberry toothpaste, Rob!
Rob: Yeah it would be like a winning combo!

While the guys are trying to combine kids toothpaste and toothbrushes, we highly recommend to check out OTHERKIN’s new EP called ‘The New Vice’, which will be released on the 16th of September. For tour dates head over to their websites (links below).
Thank you very much for such a sweet interview, lads. We’re looking forward to seeing you at Reeperbahn festival again. 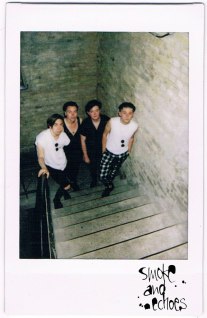 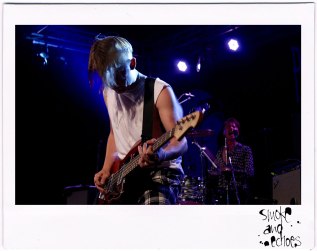 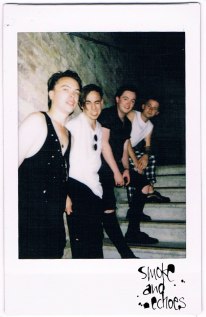 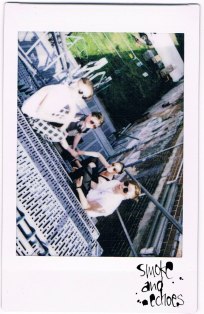 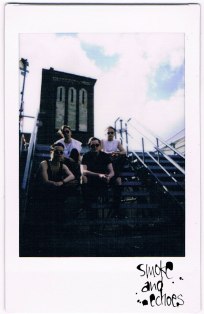