We’re at the Lollapalooza Festival in Berlin with Jagwar Ma who are about to drop the follow-up to their debut album ‘Howlin’ from 2013.

The band’s second record, named ‘Every Now & Then’, is to be released on the 14th of October and is highly anticipated by fans and the scene. Their psychedelic yet melodic style fills a space inbetween modern indie and electronic music, and as they are looking to release the new album, a promising first single called ‘OB1’ has been released along with a video. Just like their albums, the song is produced by the band itself and features a special guest with Stella Mozgawa from Warpaint on the drums.

We met Gabriel Winterfield (lead vocals and guitar) as well as Jono Ma (guitar, drums, synths and production) and Jack Freeman (bass) for a little chat at the Lollapalooza Festival in Berlin where we surprisingly found out some of their idols were rather to be found in bush documentaries and Kung-Fu classics than in the Rock’N’Roll hall of fame. To find out who we’re talking about and what it feels like to be praised by Noel Gallagher, check our interview with the guys! 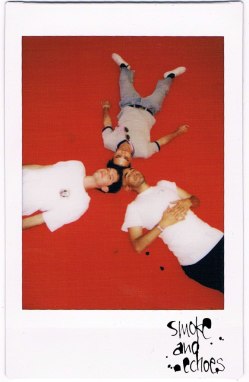 Hey guys, what do you make of the Lollapalooza in Berlin?
We’ve had a great time, we’ve only been here for a few hours, so it’s been a bit of work, work, work but yeah, it’s been really good and the weather’s been good for us.

So you haven’t really been able to see any other gigs and enjoy the festival?
No, unfortunately we have to shoot of back to the UK, because we’re playing Bestival tomorrow. So we just keep on rollin’. But otherwise it’s been pretty fun to stick around.

You released a new single this year, I think there is also a new album coming?
There is, there is a new record coming, it’s called ‘Every Now & Then’, it’s out on the 14th of October and we’ve actually put out two tracks from the album, one called ‘OB1’ and the other track’s called ‘Give Me A Reason’ back a few weeks ago.

Is there any certain idea behind the album, so what is it about?
I wouldn’t describe it as a concept album, I don’t think we’re in that way, that’s not the way we make records, but probably, I think that they will find the themes themselves, we make the music and then we have the interpretations coming from others.

What influenced you working on the album? Was there anything special?
Well yeah, I think the band itself probably influenced the second record very much. When we did ‘Howlin’, the first record, we weren’t really a band in any sense. We were just initially Jono making beats, then it was me singing on top of Jono’s beats and now it’s Jack, me and Jono working together as a band, touring around the world in front of- you know I thought of this the other day, if we counted every single person we’ve played in front of, it would be quite high now, probably a million people, it’s been like three years now. So that feels pretty incredible and that’s something that is really humbling and we appreciate all that and I think doing the second record, going into the second record, we did have that in our minds, making the music. And then obviously other things like the music we’ve listened to.

Do you have any idols?
We’ve got lots of idols!

Are you actually into Kung-Fu?
Yeah actually. A little bit. We’re pretty into martial arts (laughs). Okay then, Chris Tucker… Obviously there is a lot of music heroes for us, but after a while they are what you said, childhood heroes, you idolize them as a child, people like Dylan and Hendrix and Kurt Cobain and the Beastie Boys, Notorious, and all, Nas, all these awesome cool people that you think are great but then after a while you’ve gotta walk your own stride which is quite scary but that’s sort of what being a musician or an artist is in general. And yeah, I still listen to those great records now with a big sense of nostalgia, I think you carry those people with you forever. So yeah, that’s all about heroes.

What was the latest record that you bought for yourselves?
The Avalanches’ ‘Wildflowers’ is the most recent thing that I bought on vinyl. Also heroes of ours, Australian. -The latest one I bought was Blonde by Frank Ocean. He was pretty cool, I mean Channel Orange came out when we were working on the first record and I was really inspired by that, one of the first live things that we did was a cover of ‘Superrich Kids’, which a lot of people hated, but we did it, we gave it a crack and I actually thing it was kinda cool. – You can’t win with a cover. -The haters will hate and the lovers will love.I think the last album I bought was a Coltrane record called ‘Afrika’, of which I never heard of until I bought it and it’s pretty good. Sure I heard of John Coltrane but not of that record and I was surprised I hadn’t heard of it, so I got it and it was jammy. Tasty for the ears. Our ears just eat music. Mhm.

Is there any favourite song you would take with you on a lonely island?
Ah, this old question! Classic question. There was some friend of ours who locked themselves into a room for charity for 48 hours and played that Barbra Streisand song by Duck Sauce on repeat. It was a charity thing, you could watch it live. It was the funniest thing. It was these guys from Poncho TV, from Melbourne. they did like an interview with us. It was very very funny.

Does that mean, you wouldn’t do that?
I think the point he’s illustrating is that listening to any song after a certain point would drive you insane. The answer is probably nothing. The answer is John Cage 4’33. That’s the answer. Silence. When you asked that question before, do some people just go ‘Yeah, Smells like teen Spirit best song ever, I just wanna hear that!’. The shovel remix! There is a ten hour version of that on youtube, we could just put that on repeat. We’d probably laugh ourselves to death. I think the last answer was something by Daft Punk. Something more electronic, chilled. They said you might could put that in a loop and stick with it.Forever? Forever! John Cage – 4’33! Nothing! Actually it is a tough question for everybody. I think actually the theme song of Desert Island Discs would actually go on my desert island disc. If you haven’t heard it, check it out, it’s a beautiful piece of classical modernism.

Is there any decade of fashion or lifestyle that you would prefer to live in these days?
Well i always loved myself as a health goth, you’re a steampunk and Jack’s always been a bit of a mod. (Laughs). No I think we’re living in an age where a lot of those people identify like ‘I’m rock’n’roll or I am that’ but I think no.

I have another question about your second record, I’ve read in an interview that you were searching quite a while for a good producer for you first album…?
Really? That’s just incorrect, I produced the first record and at no point I was looking for a producer. It’s funny how much misinformation there is online. The whole point of being in the band was kind of to be self-sufficient. So like I kind of engineer, record and produce it all. We have worked with a guy called Ewan Pearson who actually lived in Berlin for the last 10 years, he recently moved to the UK. He mixed ‘Howlin’ and a guy called Steve Dub mixed 2 Tracks, he also worked with the Chemical Brothers as did Ewan Pearson and we worked with Ewan Pearson again on the mixing stage of this record. Yeah, there was never any search for a producer.

So the answer to the question I was gonna ask you is that you produced the second record as well?
Precisely!

Great! We were talking about this before, how does it feel for you that Noel Gallagher mentioned you in an interview, that people should listen to your music, that’s a great statement by somebody like him, isn’t it?
Noel is great. he’s very very cool. We’ve had the good fortune of sort of hanging out now a few times. And he’s just very supportive, you know going back to those heroes that we had, undoubted that Oasis were a huge influence for me and still kind of are, still an amazing band and particularly him as a songwriter and as a person. So I was incredible, it was a shock, I remember first hearing it during an NME Interview when they asked like ‘Did you know that Noel Gallagher liked your band?’, which was amazing. And we bumped into each other when we were rehearsing and he was next door and he came in and we had a chat about Glastonbury and then we hung out in Glastonbury and we just talked about the new record and he gave some incredibly good advice, which was because we were kind of nervous about the second record. And he said ‘You know what, when you get to my age, we just don’t overanalyze things, we just go on tour. I put records out, then I tour again. And then I make another record and I just do that.’ And we were like yeah it’s easy for you to say that, because you wrote ‘Wonderwall‘ (laughs). Hell of a guy.

Fashion-wise, do you have any favourite piece, maybe a hat or shoes or a jacket in your wardrobe?
Well I’m really enjoying these bad boys right now, pair of second hand Levi’s 501s which cost me 10 Pounds and I just cut them short and they’re just so god damn baggy, I’m loving it, just so comfy.

That’s pretty rock’n’roll.
That’s pretty rock’n’roll, isn’t it? – I’ve got that Detroit Tigers cap, which I keep losing and buying another one. I had one when I was about 9 years old, when I played t-ball and my t-ball coach gave it to me (-and more, laughter) and obviously the significance of Detroit as sort of a musical muse where Motown is from and J Dilla was from and techno and house came from. A lot of great music came from Detroit. So it kind of took on a new meaning for me, this Detroit Tigers cap and I just keep bloody losing it. I think I lost 8 and I’m on my ninth now. Basically we need to play a show in Detroit, that needs to happen. And I need to glue the hat on my head. I lost my favourite t-shirt on tour in February and a new t-shirt became my favourite t-shirt and I lost that one last week. And the difference between that and Jono’s story is, I can’t replace mine, they were one of a kind, the comfiest shirt.

What do you pack into your suitcase when you go on tour?
Some underwear and socks!

Everybody’s saying socks, it must be pretty important on tour.
No, one underwear, two socks! I don’t even think about it anymore. You can’t care, just toothbrush, socks, passport, out the door. I bought sandals this time and I didn’t regret it. I must pack my diary. I actually do. That’s pretty sweet.

Pretty sweet! Thanks for the lovely interview guys and we’re really looking forward to your new record! Jagwar Ma’s second record ‘Every Now & Then’ out on the 14th of October! 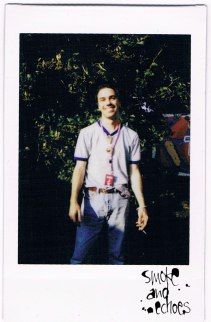 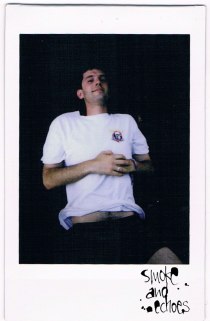 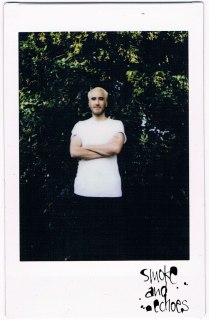 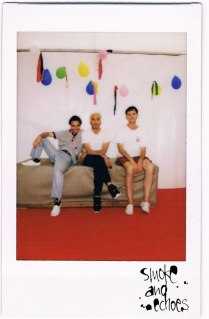 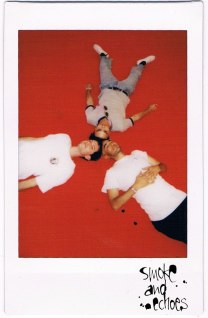 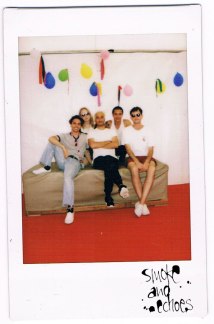