“We’re bringing back glamour!” – We were lucky to meet PINS at the Pure & Crafted Festival in Berlin. PINS are an all female five-piece-band from Manchester consisting of singer and guitarist Faith Holgate, guitarist Lois McDonald, bassist Anna Donigan, drummer Sophie Galpin and Kyoko Swan (synths and guitar). They released their second album last summer and are currently touring in Europe.

Check our interview to get to know them a little better.

Alright, please introduce yourselves!
We are PINS and we’re from Manchester.

Where have you met?
We met in Manchester 5 years ago to form a band. We just met through mutual friends, really. There wasn’t too many girls to play music with in Manchester, so we stick together.

Did you ever actually wanted to become musicians?
Faith: Well, yes everyone’s kind of always played some music. Not exactly like we do now, I didn’t sing, I was playing guitar until it cam to this band. Lois you played guitar but als Anna plays piano Kyoko has her own project and Sophie plays multiple instruments. So everyone already played something.

How do you like the Pure & Crafted Festival and is it the first time in Berlin for you?
Faith: No I’ve been to Berlin a bunch of times. But we have never played at this festival. We played a gig before at Musik und Frieden. We also supported the band Best Coasts, which was in Berlin as well. So far it’s been pretty good. We’re gonna watch Noel Gallagher later.
Lois: We’ve all been here for holidays and for party.

What do you think about this very special concept of the Pure & Crafted Festival?
Faith: We haven’t had a look around yet. I think after this we’re gonna go and have a look around.
Lois: We saw a lot of motorbikes on the way here, which is quite exiting. None of us really ride, not now (laughs).

What is your biggest inspiration for creating your music? Any particular influences?
Lois: I feel like it just happens while writing it. It happens all the time. It’s just a natural thing to do. I don’t know, like everything is an inspiration. At the moment I feel like it’s on my mind all the time, it could be anything right now. But I guess it changes in time.
Faith: I don’t know, I just feel like I write songs quite a lot and then either in PINS is just one of the ways to put that music out. If there wasn’t PINS it would be something else. It’s just like a constant thing in life.

Do you have any idols?
Lois: We were talking about this the other day. Our keyboard player loves Morrissey, but like on a whole other level of love that I don’t think I’ve ever experienced.
Faith: I don’t really think I do have any idols. I think the day when we discussed the other I had no idea who I’d pick. I mean I love music and love lots of different bands and different sounds. You might watch a band that you didn’t even know before and you like something that they are doing and try to recreate that.
Lois: For me like The Fall are one of the most impressive and inspirational bands. But I can’t go as far as the Morrissey thing.

What’s the latest record you bought?
Faith: I can’t remember, I think because living out of the suitcase since March, so haven’t been purchasing as many records, but perhaps I should.
Lois: I think maybe Dilly Dally the new album, the first album I think.

Do you have any all time favourite songs? Or is there any record you wouldn’t wanna miss miss on your record shelf?
Lois: Oasis ‘Morning Glory’. We have records we put on in the van and it spins hours and hours.
Faith: I’d say the classic ones like Patti Smith.

If you could pick another decade of music/fashion/lifestyle, which one would it be and why?
Lois: I think mine would be the 60’s. Because it was like the era of love and people start to grow their hair long and be free. As much as I really like punk music, but I’m more of that 60’s girl. You know hippie, peace.
Faith: I think I’d wanna be in the 20’s, like a dancer, smoking heroin, drinking cocktails and stuff (laughs).

How would you describe your kind of style?
Faith: Sometimes I just see pictures of us and I’m like ‘oh my god’ what are we wearing. We love vintage from different eras, everything’s shiny, big shoulders, so I think a bit of a mixed bag. I’d say glamorous. We’re bringing back glamour!
Lois: It’s just stuff that you like or if it’s a bit much, you just wear it anyway. That’s what we think now it seems to be the way. ‘Are these shoulder pads too big? – Never too big!’ But yeah it’s a mixed bag. I feel that when we look back through pictures of us they look like they’re 10 years apart, because everyone changed their hairstyle. All of our pictures don’t match.
Faith: When you have a look on our instagram, everyone’s different. Totally different hair.

Do you have any favourite designer or brands?
Faith: I mean out of the Vagabonds that’s my favourite of shoes.Lois: At the moment it’s ‘Discount Universe’, it’s a new label. They put sequence on everything. And it’s really expensive and I can’t afford any of it. And I would love to own all of it. It’s fantastic!

Do you have any indispensable pieces of clothing or any favourite items?
Faith: I mean if we could always have Yves Saint Laurent clothes that would be great (laughs), but we can’t. It’s a bit different on tour. So we’re trying to recreate it. They had like gem-tights in one of their collections which I recreated by myself, because I couldn’t afford a real thing. We usually wear the same things over and over again for like 3 months and then when it’s worn out it goes to the bin. My biggest collection thing is like coats, a lot of faux fur coats and leather jackets. I think everything is fine when you could cover it with a coat.

What did you pack in your suitcase?
Lois: English tea bags!

Do you have a favourite flavour?
Lois: Just English breakfast teas. Yorkshire tea is my favourite, it’s the best one, it’s very strong. It’s nice to have a good strong cup of tea in the morning.
Faith: I have just the clothes for the shows and a bunch of big shirts to wear as a dress. So in the day I just wear a big t-shirt. Always a towel, you never know. Let’s say in our suitcases we always have sunglasses, toothbrush, eye-mask for sleeping in the van and we usually buy pillows, we do throw them away though. We buy pillows at the beginning of the tour and we throw them away at the end.

Thanks a lot for the interview, ladies! We’re looking forward to new releases and hope to see you back around soon! 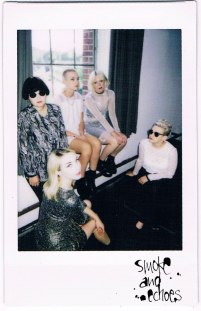 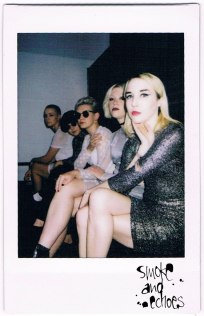 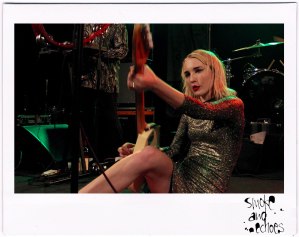 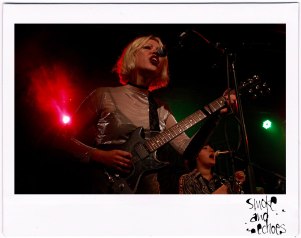 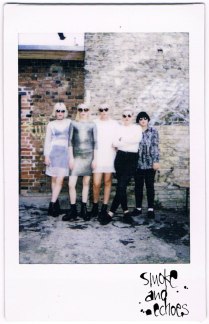 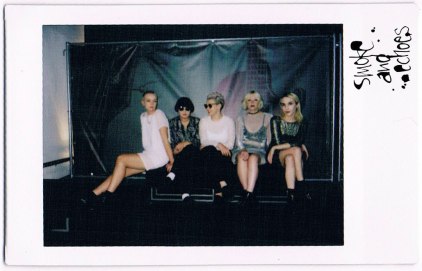