We had the pleasure to meet these two British lads after their first ever gig in Berlin for Småll Sessions at Austerclub. Brontë are James (20, drums) and Lonnie (24, guitar and vocals), both from London. They met after a gig in London, where they both were playing separately. Lonnie studied Drama, but always wanted to become a musician since he was ten years old. He just decided to study Drama, because he doesn’t wanted music to become an academic part of his life. James is actually studying on a music performance course at the moment – he’s always been passionate about music. Their music sound like a bit of The XX mixed with pop-notes reminding us of Coasts. 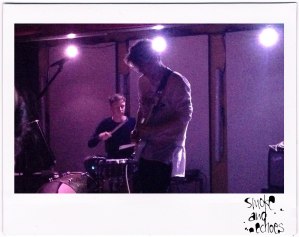 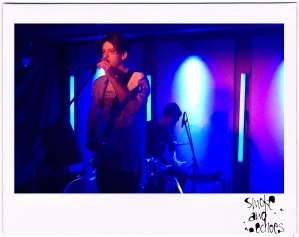 Who are you?
Brontë (they were named Thrones before)

Where are you from?
London

Where did you meet?
A gig in London, we were both playing separately! I [Lonnie] was playing solo while James was doing session work at the time. Later on I put some music online and James fancied a jam and it’s gone from there really. POW!

Why is the band named Brontë?
We wanted a name that was bold, simple and had some oomph. Thrones stands out nicely on a poster for example. We renamed the band in November 2016 into, because the direction we’re going now musically doesn’t actually suit such an aggressive name, Brontë is still bold which is important. It just comes from the author, the name is intriguing.

What is your upcoming Ep about?
All the songs that are going to be on it are pretty different but they’re all about relationships in one way or another I suppose; wether it’s about people, situations or things going on with us personally. They all come from somewhere pretty deep down I guess and we can’t wait to get it finished!

In which way are you influenced by artist?
It’s all about the groove with the music, we’re influenced by a lot of 80s pop that use real melodic guitar lines and beats like INXS but from a lyrical POV it’s a bit different, artists like John Martyn who approach songwriting very honestly and creatively from the heart without coming across as over overt or too blunt. Our track ‘Midnight’ for example is a love song, but we didn’t want it to be too cliche so it’s a little more cryptic I guess!

What’s on your MP3?
It always changes! Al jarreau is big on our playlist at the minute, he’s 80s groove filled joy! A total hero!
Japanese house are also up there right now as well as the The Hunna! We’re constantly looking for new music!

Imagine you could choose another decade of music/fashion…which one would it be?
It’s gotta be the 80s, neither of us were alive but we just imagine Tony Montana from scarface rocking out to the sound of Miami. SLICK. COOL. ROLLERBLADES.

What does mean fashion to you?
It’s another way of expression. We like it when artists embody their sound visually from what they wear or how they look, that’s always been really cool! I think fashion really helps bring across your style of music and it’s a pretty big part of the whole thing with any band.

How would you describe your style?
I think we’re quite minimalist in our style, simple but bold.

What influences the way you dress?
I think seeing other bands who are making music a similar way, you tend to share more than just a creative process with them!

Indispensable item?
[ James] It’s got to be my trainers, they’re just comfortable especially when drumming!
[Lonnie] I love my denim jacket. It goes with pretty much anything as long as it’s not double denim, I can’t pull that off!

What did you pack in your suitcase?
[James] Usually my laptop and sampler, it’s just a really good way of sketching projects and ideas down! I’ve had to get a new suitcase though, my cat used the old one as a litter tray not too long ago!
[Lonnie]
Couple pairs of jeans, some baggy shirts and my socks that look like socks and sandals. Bloody love them, oh and my game boy. Raging it through Pokemon yellow right now. First things first. Bunch of cables and pedals and my lyric book. I take that everywhere.

Where do you see yourself in 5 years?
Going on a mad one with Thrones, playing festivals and boshing out albums! All the things bands like us should be doing!

Keep up the good work and thanks a lot for the interview! 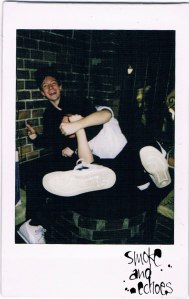 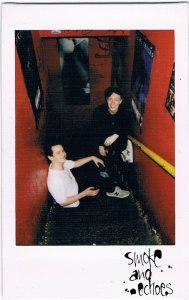 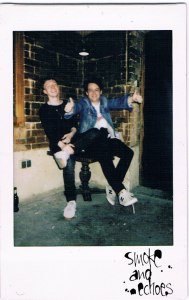