Juice could be way more than just a delicious drink in the morning – it could be a band name as well. That was exactly what the 4 British lads thought when they had breakfast once. Juice are Davis (vocal, guitar), Damon (drums), Matt (bass) and Payne (guitar), they founded 2 years ago in Birmingham, United Kingdom. The sound of Juice is pretty Brit Rock’nRoll with a good melodic flow. Their sound is simple but the lads are boiling it down to an essence which makes it pretty danceable.

Juice were already releasing an exclusive neon yellow 7″ single vinyl (featuring two tracks, ‘Acid Kids’ and ‘Sugar’) with Flying Vinyl in October 2015 before they got asked to play at the Festival. We had the chance to catch them after their set at Flying Vinyl Festival at Shapes in London.

Where are you from?
Birmingham.

Where have you met?
All about town really, we found Damon at an ATM on Hurst Street!

Why did you name your band Juice?
It came to us one morning over breakfast. It fit so well that we haven’t looked back since.

What are your songs about and how would you describe your style (of music)?
Davis likes to write about experiences from his own life. For example Acid Kids is about a kid who he saw running around Glastonbury under the influences and he wrote Tommy Slow Down in the back of a car going down the motorway. In our music we like to go for maximum sleaze and a dash cheese, we’re still fine-tuning the ratio but we’re close to the perfect balance of sleaze and cheese.

In which way are you influenced and inspired by other artist?
I like to see an artist going further than the music, whether that’s in their message, in their videos or in their visuals. If a band makes good music videos they’re instantly more likable to me. I also really respect everything M.I.A is doing. Her music, aesthetic and videos are so mind blowing.

What’s on your MP3/iPod?
About 30GB of music, personal highlights are:
Shaun Ryder – Close The Dam
40 Thieves – Don’t Turn It Off
Elliott Smith – Either/Or
Flying Lotus – You’re Dead!
Good Morning – Shawcross
Kylie Minogue is getting a lot of plays at the moment too

Imagine if you could choose another decade of music and fashion, which one would it be?
Definitely the 70s, the music being made at that time was incredible, The rise of disco to the return of Iggy Pop and everything in between! I also love pictures of the skate and surf scene in California at that time.

How did you come to Flying Vinyl?
They approached us shortly after Acid Kids was released, it sounded too good to be true! The work they do is really great, introducing people to new smaller bands that probably wouldn’t get to put their music out on vinyl. (We totally agree – they’re doing a great job!)

What means fashion to you?
Fashion is definitely an extension of your personality. Your appearance is what people see first when they meet you; it says a lot about who you are, what you’re into and even where you’re from.

How would you describe your style?
I tend to dress quite simply, most days it’s an old band t-shirt, jeans and vans. I’m a sucker for a good jacket, most of mine have back patches or badges on them now.

What influences you in the way you dress?
Mostly media like movies and television, as well as celebrities and musicians I follow. Friends and family definitely have their part to play.

What did you pack in your suitcase?
Your basic portable disco set. Now, these can take many forms but if I need to get by with just the essentials here’s what I take:
Boombox, it’s best to use one that can be run on batteries.
Your portable disco ball.
A torch (to shine at the portable disco ball).
An iPod.
A good mixtape or two.
Your best pair of dancing shoes, you should know which ones are your best.
A tube of Berocca for sustenance and hydration, mango is the best flavour.

Where do you see yourself in 5 years?
Hopefully four albums and six visits to rehab deep on a private island in the Pacific. More realistically though, probably in the co-op counting pennies for a six pack.

Fingers crossed that you have more than just some pennies in your pockets in 5 years then – keep up the good work! Thanks a lot for the interview Matt. 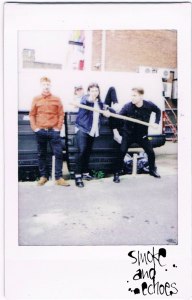