It was another lovely Saturday afternoon at Immergut Festival 2016. People were sitting on the gras, were eating some ice-cream, were enjoying the beautiful sunshiny day and were listening to the soft and poppy tunes by Greta aka Frankie Cosmos. The first word which came into our minds when we heard the first notes of Frankie Cosmos was ‘bubblegum-pop’. Greta has her very own style of music. She’s flowing very softly and the sound of her voice is pretty gently – very harmonic and such a perfect tune for a sunny afternoon. Greta and her charming band came from New York to Neustrelitz to play an one hour set. After their gig we had the chance to talk with Greta about her music and the was she likes to dress.

Where are you from?
New York City

Why did you choose the name ‘Frankie Cosmos’ and what is it about?
It was a nickname that my boyfriend made up. Frank comes from Frank O’hara the poet, and the Cosmos is just this image of mystery and infiniteness.

What is your music about and how would you describe your style?
It’s about emotions and concepts. I would describe it as lyric-heavy / diaristic.

In which way are you influenced and inspired by other artist?
My melodies and song structures are often inspired by whatever I am listening to most. I am also inspired emotionally by people who make what they need to make and don’t seem to worry about making something marketable. Also I love artists who make the same things over and over again until they reach their goal. Like all the variations of some Matisse paintings – I like to do the same thing with song ideas.

Imagine if you could choose another decade of music and fashion, which one would it be?
For Music: the 1960s. For Fashion: the 2060s.

How do you like Immergut Festival? What do you think is so special about it, maybe the wagons in the artist area?
I thought Immergut was amazing. The most special part was playing outside and having it be a beautiful day. Everyone was just really calm and nice.

What means fashion to you?
For me, I think fashion is mostly about comfort and feeling good.

How would you describe your style?
I dress very utilitarian. I like to wear pants with pockets, clothes that are easy to move in, and soft tee shirts. Sometimes I like to dress up/put more care into my “fashion” but it feels more like playing a game than thinking about the rules of style or fashion.

Indispensable piece of clothing for you?
Underwear and socks!

What did you pack in your suitcase?
As much underwear and socks as I could fit, 5 t-shirts, 1 pair of shorts, 1 pair of leggings, 1 pair of jeans, a zip up jumpsuit, my bag of toiletries (which is probably the biggest thing in my suitcase), a camping towel. I also bring a backpack on tour, which has my headphones, phone charger, a book, pens, notebook, my wallet, keys, allergy pills. That’s about it!

Thanks a lot for for the interview and keep up the good work – ‘bubblegum-pop’-girl aka Frankie Cosmos! 😉 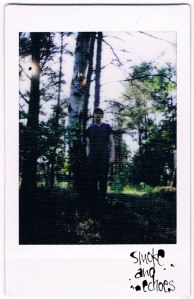